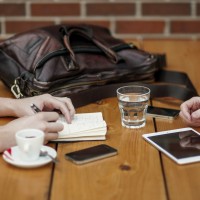 OK, so this is basically the kind of article for anyone who either has recently gotten out of a long-term exclusive relationship or isn’t really big on dating, but has been thinking that it’s time to get out there a bit. In short, if it’s been a while (give or take several years) since you’ve dated anyone new, I thought that I should share with you some of the ways that dating has changed. Not to “scare” you, but to prepare you.

That’s not to say that dating the old-fashioned/organic way is extinct. A lot of people still meet one another at grocery stores or are introduced by close friends and are able to end up with a “happily ever after” sans online dating or social media. It’s just that there are a few dating trends that are a good idea to keep on your radar too.

Are you ready? Here are six things to know about what it’s like to date. Now.

Dating and courting are not one in the same. Technically, they never were, but as the craze of the hook-up culture is taking over (at least for now), it’s still something that should go on record. Here’s what I mean by all of this: If you’re looking to make a real connection with someone with the hopes of it becoming long-term, it’s a good idea to get that out in the open during, I’d say the second date. There are a lot of folks out here who may like spending time with you, but only want something casual. And by “casual”, I mean, they plan to see other people, they may not date you regularly and if you’re down for sex on the first date, so are they. These days, dating is more about simply having something to do on a Friday night. Courting? That’s about really investing time in the hopes of building something real and lasting—with one person. Yeah, don’t assume that the words are being used interchangeably. In many instances, they are not.

There isn’t anything “desperate” about online dating. If you’re on this site, then even if you were pretty young when it came on, you probably remember the show Love Connection with Chuck Woolery. Well, what video dating was in the early 80s to mid 90s, that’s what online dating is now. The key is to find the kind of service that best suits what you’re looking for. So, while you might not want to sign up for what is known as one of the more popular hook-up sites (Tinder), out of the 1,000 different possibilities, eHarmony and Match continue to have pretty good reputations. You can read more about the best online dating sites here.

Social media isn’t just for teenagers. Although it appears that young people are the entire motivation for the social media movement, according to an article that was published by The Washington Post last year, the amount of people with a Facebook account amount to the amount of people living in China! That’s a whole lot more than teeny boppers! So, if someone hits you up on your Facebook page or sends you a DM (direct message) on Twitter or comments on a picture on your Instagram, don’t chalk it up to them being “immature” or “too young for you”. It probably just means that 1) they are exhausting all of their options (which is romantic, in a way) and 2) they’re tech-savvy and in this day and age, dating someone like that will always work in your favor!

Texting isn’t rude; it’s convenient. A couple of years ago, a woman by the name of Ruthie Dean wrote a book entitled Real Men Don’t Text: A New Approach to Dating. Although it does provide some great dating insights, the title isn’t totally true. Sure, some people may use texting as a way to avoid intimacy, but I’m willing to bet that if our grandparents had cell phones back in their courting days, they would’ve texted too. Texting is simply a convenient way to convey short messages. A “good morning”. An “I’m thinking about you”. Or an “I’m running five minutes late.” Yes, if a man asks you out on a first date via text, that’s pretty lame on his part. But to confirm a date that’s already set? It’s fine.

Chivalry is not dead. Just a little dormant. A wise man once said “Chivalry is not dead. It just followed wherever being lady-like went.” It’s pretty much a slick way of reminding us to not loosen our grip when it comes to our standards. If you do decide to create an online profile, mention that a man opening doors for you is a big plus. If you hire a professional matchmaker, let them know that you find something extremely attractive about an old-fashioned gentleman. And if you’re set up on a date, bring up how important chivalry is to you. It’s a myth that a woman can’t find a man with the manners of her grandfather. It’s a woman by the name of Clementine Paddleford who once said “Never grow a wishbone where your backbone ought to be.” Although some men may not pull out a seat for a woman, that doesn’t mean that none of them do. One thing that hasn’t changed about dating is it’s important to set your bar and not lower it. If you keep that in mind, you’ll be ready for the dating scene. Even with all of its changes.