Home / Body • Mind • Spirit • Thriving Tips Blog / If You Are Perimenopausal And You Know It, CLAP YOUR HANDS! 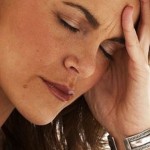 You are not menopausal, yet, but you know it’s knocking at your door. Your periods have become sporadic but not consistently so. It’s anybody’s guess when your next period will occur. You have learned from firsthand experience what a hot flash is and you DO NOT LIKE IT. Your breasts have ballooned in size and are painfully tender to the touch, which means you have way too much estrogen. But wait, before much longer, you will be hard pressed to ferret out any estrogen in your body. This is perimenopause, the not-so-delightful transitional time leading up to menopause, when the menses stop altogether. This phase can last for years. For others, it is over in a whipstitch. Ask your mother how long it took her to make the transition. You will probably do likewise. 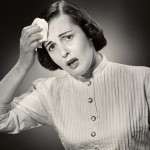 As your body works toward the grand finale (menopause) hormones become skewwhiff and fluctuate like the weather. One minute you’re cold, the next you are certain you’ve stepped directly into Hades. You can’t sleep, you’re sleeping too much, your bones are sore, your joints are aching, you’re irritable and impatient and yell even more than you used to and then there is the … crying. Your husband thinks you have gone completely bonkers.

A woman’s body is in flux, no other way to put it, during this conversion. In addition to the myriad of symptoms a female experiences during perimenopause, depression may also make itself known. Great. Just what you need on top of everything else.

The prevalence of MAO-A in the prefrontal cortex (which is the front of the brain) is responsible for those crying jags. You are NOT a drama queen. You can blame the blues and sob fests on this pain-in-the-butt protein. This may explain the greater rates of depression in women during this time of their life. When a person is capable of maintaining a good mood it’s because she has sufficient levels of dopamine, serotonin and norepinephrine (the feel good brain chemicals). When these chemicals are broken down by the protein MAO-A, which happens during perimenopause, this can lead to depression. On top of this, keep in mind that estrogen fluctuates like nobody’s business during this phase. In fact, it vacillates five times greater during perimenopause than it did earlier in life. Forget about PMS! This lasts much longer than a couple of days before your period each month. This, plus the fact the perimenopausal woman has 34 percent more MAO-A present in her brain than a younger woman and 16 percent more than a fully menopausal woman, clarifies a lot. Perhaps, your husband or partner should read this… Maybe you are going bonkers, but it’s because your body is engaged in a rhumba/tango/Zumba/quick step that you have very little control over. For some women, the prospect of their child-bearing years ending brings sadness, for others, joy. But it is, in fact, the end of an era the woman will never recoup. Sadness can lead to depression, particularly to those already predisposed to melancholy.

Is there anything you can do about it?

Ask your physician about the antidepressant Manerix or moclobemide, which specifically aims at MAO-A production. Other antidepressants including Paxil, Prozac, Zoloft or Wellbutrin may help.

If you prefer natural remedies… You may have heard this before, but didn’t pay THAT much attention. You should. If you are struggling with depression, join a yoga class or learn to do it on your own. Yoga increases blood flow through the body, resulting in a balanced and relaxed feeling.Any form of exercise is going to help improve your mood and maintain health.

Diet is of the utmost importance and most of us fall short in this category. It is imperative that you consume Omega 3s (healthy carbs and healthy fats) because they are essential for mood support. Eat fruits, whole grains, brown rice, etc.

Fish oil should be part of your diet because it contains healthy quantities of two omega 3 fatty acids. Your brain operates more efficiently when there are sufficient levels of fatty acids in the body. Ask your doctor which brand she recommends.

Some people swear by herbs and the positive impact they have on mood. Black cohosh reportedly helps relieve various perimenopause and menopause systems, including moodiness. Consider taking ginseng, which prevents disposition swings as well as hot flashes and insomnia, according to Naturalnews.com. Used to treat irritability, anger and grumpiness, wild yam is considered a natural treatment for regulating hormones, expressly progesterone. Discuss these natural and alternative options with your physician. Unfortunately, there is no magic wand to be waved and make your woes go away. Keep in mind, perimenopause is temporary. It will eventually release you from its grips. And then … you have full menopause to look forward to.

Support is available for those of you struggling with depression.

If you have any suggestions about perimenopause and depression, please feel free to share with the Thriving Cougar community. We’re all ears.