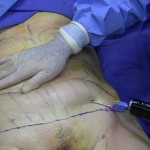 It’s a quick fix, liposuction, although some women are hesitant to go this route, and with good reason. It’s a medical procedure and as with all medical procedures there are inherent risks, not to mention the expense and recovery time.

However, you have weighed the pros and cons and decided you are going to do it because you cannot get rid of the fat that has been plaguing you for years and you are sick and tired of trying. But then … your friend cautions you: The fat will come back, just not in the area that you have had liposuctioned. You mean … if I get my thighs liposuctioned and for the first time ever they are slim and trim and I am happy as hell … the fat will pop up elsewhere?

This is certainly not your objective. Yes, you want slimmer thighs but you don’t want new fat appearing in places that were never fat before. Can this really happen? Yes, if you are not vigilant about avoiding weight gain.

Dr. B. Aviva Preminger, M.D., plastic surgeon, said (http://www.realself.com/question/lipo-fat-return-places):  Liposuction does NOT cause a redistribution of fat!  Rather, if patients gain weight after liposuction, it may accumulate in other areas, especially since liposuction removes fat cells in the areas that are treated.  Regardless, liposuction is not a weight loss procedure, but a contouring procedure.  The goal is to maintain the investment you have made, watch what you eat and exercise regularly after the procedure.”

*Maggie was 53 when she had liposuction on her stomach, hips and thighs. She gained weight after the procedure and reports her fat came back “One hundred fold.”

Although her stomach is still flat 12 years later, she says the area above her stomach, the midriff, ballooned with fat and is now out of proportion to the rest of her body. She claims her hips and thighs are also huge, in spite of the procedure.

Maggie said she now has a very big bubble butt. “I never had that before or anything that could be confused with a bubble butt.” For her, the lipo weight is “Five hundred times harder to lose. It does not come off normally.”

Maggie describes herself as a food addict. “If you are not a food addict, I am for (lipo) 100 percent. (If you are a food addict) and if you do (lipo) thinking you can face your demons later, DO NOT DO IT! Disfigurement for me is the size of my calves, knees, thighs, midriff and bubble butt, which are very disproportionate to the rest of me.” She thinks her now fat calves, wrists and chin are not only the result of weight gain but because of the liposuction.

Sharon Osbourne of “The Talk” and manager of Black Sabbath, who has had numerous lipo procedures, but is still battling weight issues, appeared on Chelsea Lately (2-10-14.) The topic of weight came up and Osbourne remarked, “If you get this part lipo-ed the fat won’t come back there but it will come back here (pointing to another area.) You just follow your body around.”

According to Dr. Arthur Perry, FACS, (http://www.doctoroz.com/blog/arthur-perry-md-facs/fat-comes-back-after-liposuction) fat has a dastardly way of creeping back into the body. Dr. Perry notes that a year after liposuction on the thighs, a patient has more fat in her belly than she had before the procedure. When bellies are suctioned, watch out for weight gain in the thighs and arms within a year.

This comes as no mystery to the doctors who perform liposuction since most patients weigh the same one year after the surgery as they did before, even if four pounds of fat was suctioned off.

The Body is Programmed to Store Fat

The body intuitively does everything to survive, and that means storing fat. Being overweight, back in the days of caveman, ensured a person would survive the next famine. Our bodies are still programmed to do the same. The body continues to make fat cells, which live for approximately seven years. When those cells die, the body eagerly makes more (to our chagrin.)

If a person has liposuction and doesn’t gain weight, she probably doesn’t have anything to worry about. However, if she does gain weight after the procedure, her suctioned tummy stays fat-free but fat deposits will pop up in the strangest places, including the neck and other areas of the body where the person was never fat before.

You may not mind fat redistribution. You’ve got a taut belly and love it. Perhaps you don’t care that the back of your arms are now chunky. But some people care, a lot. (http://www.dailymail.co.uk/health/article-1382729/Liposuction-fat-year-Whats-taken-thighs-returns-arms.html.

Liposuction annihilates the structure under the skin, which is thought to be the reason fat cells do not re-grow in the areas from which they were removed, according to Dr. Rudolph Leibel, an obesity researcher at New York’s Columbia University. Leibel maintains the body makes up for the swift loss of fat cells by growing new fat cells in other parts of the body. (http://www.cumc.columbia.edu/ihn/faculty_/leibel)

Alternatives to Liposuction: The Pros and Cons

There are new medical procedures on the scene which some doctors believe are as good as if not better than traditional liposuction. However, there are naysayers who are not convinced.

The new techniques deliver cold or heat to damage and shrink fat cells. Some of these techniques include radio waves (radiofrequency), sounds waves (ultrasound), exposure to cold (cryolipolysis) and light waves (low-level laser.) These are non-surgical methods used to lower body fat.

Dr. Steven Jacobson of the Mayo Clinic (http://www.mayoclinic.org/tests-procedures/liposuction/expert-answers/liposuction-alternatives/faq-20058210) says alternatives to traditional liposuction usually do not produce as striking results as those achieved with liposuction.

He does not recommend these alternative procedures for obese people because the techniques are geared toward those people of normal weight, general fitness, but having some areas of fat that exercise has not gotten rid of.

On the other hand, some physicians believe these alternative techniques are very effective. Dr. Abbas Chamsuddin (http://www.radisphereradiology.com/radiologist/chamsuddin-abbas-md/), reports patients are not always satisfied with standard liposuction because skin sagging occurs after the fat removal procedure. (http://www.sciencedaily.com/releases/2013/04/130415124819.htm)

When ultra-sound assisted guidance of a laser is used during laser lipolysis this results in first-rate sculpting with tight skin. Dr. Chamsuddin explains when using liposuction with laser lipolysis the result is a well-sculpted, tighter abdomen without enduring surgery and a faster recovery time.

The way it works, the heat (thermal) energy from the laser melts fat whereas typical liposuction removes it. This procedure actually prompts the production of new collagen, which is the primary protein giving skin its tone and texture and ability to stretch.

The laser induces collagen to contract. This tightens skin, which prevents skin sagging. Furthermore, more fat can be removed using this technique than can be removed with traditional liposuction, according to Dr. Chamsuddin.

Are you considering getting liposuction, either the traditional or alternative way or have you already done it? If so, we would love to hear about your experience.

Are you satisfied? Would you do it again? Do you regret it?

Did fat come back in areas that heretofore were not problematic? Was the recovery time difficult?

Would you recommend liposuction to your daughter or best friend?

Consumers need to know as much as possible before taking the plunge, and that certainly includes when contemplating undergoing elective surgery.