Home / Thriving Tips Blog / Dating Younger: How to Connect with a Different Generation 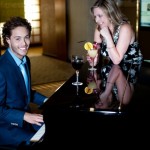 Younger men can be vastly different from older men in many ways. A younger man will invariably introduce you to new things and possibly new ideas, take you to interesting places and bring a lot of fresh energy to your life. But dating a younger man definitely has its challenges. Overcoming a generational gap can be difficult, but it can be bridged.

Each new generation is shaped by the attitudes and events of the day, and this can create significant differences from one age group to the next. Baby Boomers, born between 1946 and 1964, lived through Presidential assassination, Woodstock and the tumultuous Vietnam years. This generation was known for its ideals, and many of them grew up to be hard-working and ambitious in their careers. Generation Xers, by contrast, tend to be independent loners. They were born between 1965 and 1979. Generation Xers were shaped by the early computer age, and many of them were children of working parents. Early independence made many Generation Xers self-reliant. The Millennial generation, once known as Generation Y, was born between 1980 and 1999. These social butterflies tend to be team-oriented and super-connected to the world around them, because they grew up in the age of social media and readily-available Internet connections. The Millennials were shaped by events like 9/11 and the recession. Each generation has its own slang, its own values and its own pop culture and political events. Because the generations are so different, there can be a disconnect among those who are dating in different generations. So how can you connect to a younger man you’re dating?

Younger men can be a refreshing change, because they grew up in a world where women are their equals and perhaps even their betters in some ways. They had working moms and are more apt to be accepting of a powerful woman in their lives. Many older women find they have much more fulfilling partnerships with younger men because the old power struggles aren’t at play. Younger men may also lack the guile of a more experienced older man, which can be extremely refreshing.

Dating younger truly gives women the chance to see a new world. A man from a different generation will see the world differently than you do in many ways. This can be exciting and can open you up to new things, but it can also lead inevitably to disagreements. Learn how to embrace and celebrate these differences to keep them from becoming a divide between the two of you.

Dealing with the Differences

Big and little differences are going to appear when you date a man from a different generation. Little problems, like music and movie preferences, can create unnecessary tension. But those generational differences can create a wide gap between the two of you in other ways. You may have opposite political views, and the two of you may not have a full understanding of the historical and cultural events that shaped your lives. These kinds of differences can keep you from connecting at a deep level, which is often ultimately damaging to a relationship.

Embracing the differences can help you bridge the gap. Make an effort to understand each other, and be open-minded about trying things he enjoys. Introduce him to the movies and music you enjoy. You may find that the two of you do have similar tastes, after all.

When you date a younger man, there is one very clear potential problem you must avoid: don’t mother him. It’s a little too easy to slip into the role of “second mom.” Remember it’s not your job to become his teacher, his watchdog or his lecturer. You have more experience, you’ve made more mistakes and you probably do know better – but everyone’s got to grow on their own. You can’t force him to grow, even when you really wish he would.

If you find yourself constantly compelled to teach him lessons and you slip into that second mom role even when you don’t want to, ask yourself if you’re really ready for dating younger. If you’re constantly annoyed by his immaturity or lack of responsibility, an older man may be the more appropriate partner.

Are you considering dating someone from a different generation? Have you dated someone younger or older? Does age really matter? Please share your experience. By Rina Lacey