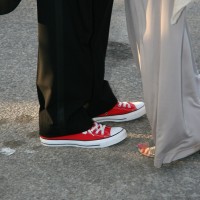 When it comes to love, as the old saying goes “Age ain’t nothin’ but a number.” In fact, when it specifically comes to dating men who are younger than you are, there are several benefits and considerations that come with doing so.

Not only do younger men tend to have lots of energy, they are also prone to being open-minded about risk-taking and trying new things. Plus, many of them will tell you that they tend to find older women quite intriguing. That kind of curiosity can make them more attentive and willing to experience (and where needed, even learn) whatever it is you want to share with them.

At the same time, there are some things that you should think about if you’re considering doing more than casually dating a younger man. So, if there’s a young man you’re attracted to and you feel that the appeal has the potential to become more than an occasional lunch or drinks after dinner, this article is going to share with you six things to ponder before anything gets too serious.

Their interests may (slightly) vary from yours. If a guy is only a couple of years younger than you are, this point is probably not going to matter much. But if he happens to be several years younger, then it’s important to remember that he grew up in a different era than you did. This means that you might have different interests, especially when it comes to things like entertainment. However, just because you both may prefer different kinds of music or movies, the good news is that you can introduce one another to your own personal preferences. Yes, one of the best things about dating someone who is a different age than you are is that you both can discover new things—or you can learn to see things from a different perspective. One you probably would not have considered otherwise.

They may not have the same relational goals. One mistake that some women make is that they allow their feelings to get ahead of their relational goals. Meaning, they date someone and start to emotionally invest, only to discover that they are on one page while the guy is on another. Here’s an example: If you’re in your late 40s and you’re interested in someone in their mid-late 20s or early 30s, make sure that you’re clear about what you want in a relationship before starting anything. A younger man may not be in any rush to settle down and that’s OK. However, if you are looking for a serious and long-term commitment, you don’t want to find that out that he doesn’t months into the relationship.

Their family and friends might have reservations. When people have close relationships with their family and friends, that’s a good thing. There are studies which indicate that those kinds of individuals tend to be more mentally balanced and emotionally centered. At the same time, these are the kinds of individuals who also have a tendency to allow other people’s opinions to heavily influence their own life choices; including who they date. This is not always the case, but if you’re going to date a younger man, prepare yourself for the fact that his loved ones might be a bit skeptical. At least initially.

Their finances may be—challenging. One thing that’s attractive about a lot of older men is that they tend to be more settled. Not just emotionally, but financially. When someone is younger, they tend to figure out how to make a lot of financial choices through trial-and-error. From dealing with credit card and student loan debt to deciding if it’s smarter to pay rent or a mortgage to learning how to plan a date that goes beyond dinner and a movie, these are all challenges that younger people oftentimes face. And it could indirectly affect your world if you choose to date a younger man.

They might seem a bit less mature. No one wants to be in a relationship with someone who is constantly trying to change them. This can sometimes be a struggle when you’re dating a younger man simply because he may not be mentally or emotionally where you are. The thing to keep in mind is that it’s one thing to be immature. It’s another matter entirely to be a jerk. That said, don’t fault a guy for not having as many life experiences (which in turn brings forth wisdom) as you may have. Do fault him if he’s doing things that are rooted in arrogance or if he’s inconsiderate, though. If that’s the case, it’s not an “age thing”. It’s a personal problem that he needs to deal with.

They might have different intimacy expectations. If there’s one thing that we all can agree upon is that views on sex and dating now are a lot more liberal than they used to be. In fact, there are some people who find the “three date rule” (you know, the one that says you shouldn’t have sex until the third date) to be pretty antiquated. There are also a lot of articles that say the “hook up culture” is here to stay. That being the case, there are definitely some younger men who may expect sex on the first date. That’s why it’s a good idea to be clear about what your personal standards are from the very beginning. If you would prefer to wait, that’s not being “old fashioned” so much as it’s “sticking to your guns”. The right man, no matter what his age may be, will respect that.

If you’re someone who has dated younger men before, what are some of the challenges that you’ve personally had to face?